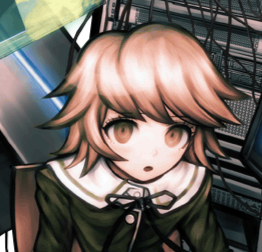 This carrd was made to educate people on why people percieve Chihiro Fujisaki as trans!

Before we begin, let me ask a question:

Please keep out of this discussion! This topic is about trans + nonbinary subjects. Just like a white person stays out of PoC discussion because it doesn't involve + affect them, a cis person should not be giving their opinions on this matter.

Just be sure to support your trans friends and to listen to them!

Then you can discuss this matter! However, as this is about a transfem character, TMEs should not silence transfems voicing their opinions on the matter; we should uplift them instead.

THIS CARRD CONTAINS: transmisogyny, death, mentions of misgendering, mentions of groping and spoilers for DR:THH Chapter 2! You have been warned!

(I will only use she/her for Chihiro)

Why do you believe Chihiro is trans?

To be blunt, Chihiro is very trans-coded!

As we all know, in the beginning of Chapter 2, Monokuma threatens to out the groups "secrets", one of which happens to be Chihiro's AGAB. This makes Chihiro decide to take actions into her own hands, and she tells her secret to Mondo. Feeling emasculated by Chihiro's own strength to come out, he kills her with a dumbbell.

During the collection of evidence + the class trial, Chihiro's body was violated in order to obtain evidence, thus leading to everyone discovering her AGAB, and immediately begin to refer to her with he/him pronouns.

What does this have to do with Chihiro being trans?

These experiences almost directly line up with the daily fears and experiences that trans people have to deal with in reality, which include:

These are experiences that trans people have faced for centuries. Whether the writing was intentional or not, Chihiro is trans-coded, ESPECIALLY to other trans people.

But Chihiro's arc was about becoming more manly!

To sum up Chihiro's "arc": She was bullied as a child for being "weak" and to prevent herself from being bullied, she presented a girl. Despite this, she wanted to become stronger so she could tell others the truth about herself. This ultimately lead to her death at the hands of Mondo.

While she did have the strength to tell Mondo her AGAB, she didn't come out to anyone else besides Mondo and Naegi. She didn't get the chance to prove her own strength by telling others her own secret on her own terms, which is all she wanted. Instead, we are told everything Chihiro WANTED to tell us through the words of Monokuma. The only time she gets to speak for herself is moments before her death.

There are MANY problems with this arc, which include:

Someone simply overlooking these problematic pieces of a story will not harm anyone. It should be obvious that Chihiro was handled very poorly. Her odds were never in her favor.

Why do you want Chihiro to be trans if the writing is bad?

In a sense, it's reclaiming. Chihiro is a sweet, gentle character with a good heart, living in a universe that treated her poorly and disrespected her. Also, because we just can!

LGBT+ rep is not great in Danganronpa. Characters such as Kokichi, Komaeda and Tenko (who are all extremely gay-coded) are treated as stereotypes and caricatures, constantly denied their own identity. This is a similar case with Chihiro.

And as such, we decide to make our own rep. We take characters we like and percieve them as LGBT+ because it gives us comfort. And Chihiro, who not only is sweet and a good person, but also a character that trans people can relate to or see themselves in. It's fair game!

It should be noted that transfems can also be nonbinary and use labels such as agender, genderfluid, demigirl, etc, so it's fine if you do! Transfem nonbinary people exist!

(many people think Chihiro is unaligned or use they/them to avoid harrassment as well!)

Let it be. It's harmless and it will not affect you in any way! Block if you need to. But do NOT harrass people for using she/her for Chihiro or thinking that she's transfem. It's their choice.

Then you are not for trans headcanons.

I've seen this one a lot from cis people, and to be blunt: if this single perception of a character makes you so mad to the point where you stop supporting trans people + trans headcanons, then maybe you were never an ally.

This carrd is not meant to try and change minds; it's simply meant to educate and to let things be seen through a different perspective. Don't take this personally! All I ask of you is to try and understand peoples perspectives and to be kind. 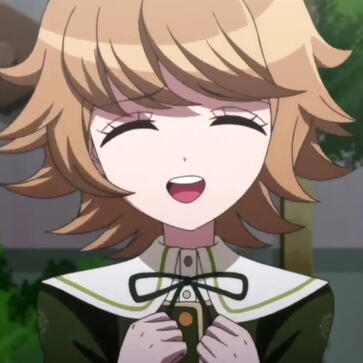 I hope this carrd helped you understand why people see Chihiro as trans. Like I said, the point of it is not to change your mind, but to offer an explaination instead.

This carrd was inspired by this article which was written by a trans woman! Please be sure to read it and support it and the author. This would not be possible without her!